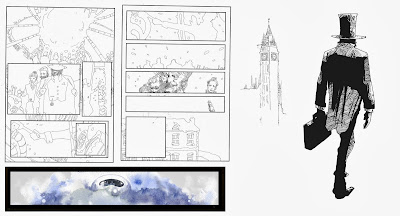 To start us off here are some lovely sketches from Neil McClements - whose psychedelic stylings on Chris Mole's "The Royal Chronometrical Society" were one of the many highlights of Issue 2. Mr McClements is one of the most visionary artists in the small press and it's a rare pleasure to see his workings. Cor blimey.

Before we press on here's a further chunk of recent eye-poppery which comes from Bruno Stahl another of the small press artgods who we were lucky enough to squeeze into Issue 2. "Stand and Relive Her" by the gloriously mad Greg Meldrum always gets the hearts of convention-goers palpatatin' and we've sold a fair few issues off the back of this strip alone. No wonder! Bear further witness over on Bruno's Deviantart page...

Since the release of Issue 2 we've had some lovely reviews/mentions on a few websites so here's a small round-up - if anyone reading this runs a review blog and wants a free PDF give us a shout on the usual address and we'll furnish you with one!

Writing titan Mike Lynch gave us a shout on his blog here as well as the aforementioned Meldrum here. In terms of reviews our Issue 1 got a mention on Pipedream Comics' weekly digest here where Alex Thomas says our quickfire anthology style "feels really unique". Next Issue 2 got a thorough and enthusiastic review from Steve Hargett aka Judge-Tutor Semple on his blog here - he'll have a table at Thought Bubble this year for his writing and reviewing which I encourage you to pop past and say hello if you're there as he really is a very lovely fellow. Finally our most constructive and in-depth review came from legendary coverfiend Pete Wells and was displayed on Everything Comes Back to 2000ad here. It means a lot when anyone puts so much of their time into reading your anthology and finds stuff to enjoy in there - especially someone who loves 2000ad as much as Mr Wells does. Also he compares me to a sexy librarian, so there's that!

Here are your editors looking suitably deranged at the Bristol Comic and Zine Fair which took place just this last weekend in our neck of the woods. It was a non-corporate DIY sort of affair and as such was brimming with artists and genuinely-interested sort of folk which was hugely refreshing. Also no cosplay - which will be a damning indictment for some or a huge blessing for others. Either way it was a very positive few hours and I can't doff my hat to the organisers further. Because then my hat would be on the floor. Overdoffed. As per usual here are some nice folk that we saw and spoke to who you should go and look at and say lovely things about. All photographs are not mine but were taken by Ruth Garner.

First and foremost was our tablemate Mr Andrew Scaife - illustrator of "Karma Traveller" in Journal #1 and "Why Haven't They Killed Hitler?" in Journal #2 - he was selling numerous prints as well as his one-shot comic New York Park you can investigate his work more thoroughly on his Tumblr here http://andrewscaife.tumblr.com/

Next we see an action shot Mr Jordan Collver of Water Closet Press who was selling the glorious Ladies & Gentlemen comic which he co-creates with Mr Richard Worth (not present) - Jordan is a damned fine artist and will be coming to a Journal near you VERY SOON. I should also mention the obscured fellow sitting next to him is David Ziggy Greene who is fucking amazing. Other Bristolian legends present included that endlessly admirable patron of Bristolarts Big Jeff and the amazing Paula Knight. The highest praise has to go to Nick Soucek, Simon Moreton, Esme Betamax and all volunteers and enthusiastibubbles that made it such a solid and well-attended zine fair. 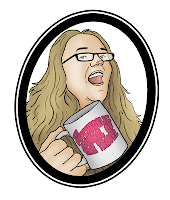